Solar pannels are an excellent way to reduce carbon emissions, they are also ideal for generating power in remote locations. 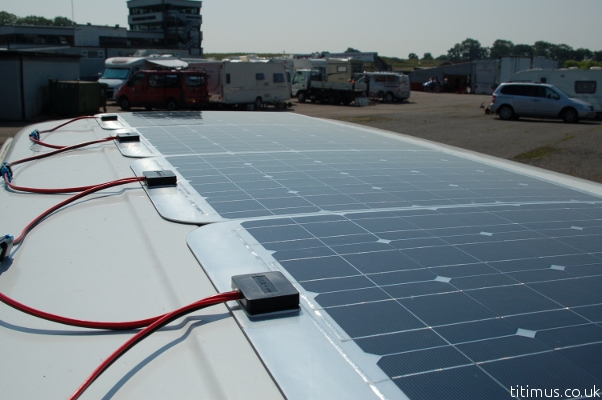 The goal of this project is to create a light weight, easy to store and deploy solar array for off grid use in a camper van.  It must be powerful enough to provide power to lights, laptop, batteries and entertainment system. The panels need to be easy to install and remove for use elsewhere and safe storage.

The cheapest light weight and durable panels seem to be the aluminium backed and laminated monocrystalline type. The plan for fixing the panels down to the roof of the vehicle will be with adhesive backed magnetic sheet. Four 50w panels will be wired in parallel and connected to an auxiliary battery via a solar charge controller.

Two brands of the same aluminium backed semi flexible panels were tested, Lensun and Sinosola, both bought through ebay. Sinosola were the preferred choice as they are cheaper, more powerful, smaller and more versatile. The Lensun panel came pre-wired with a bonded cover whilst the Sinosola came un-wired with screw terminals making it easier to wire as required. When tested side by side a 50w Sinosola made 93% of the power a Lensun 60w made. If you said the 60w Lensun was truly 60w that would make the 50w rated Sinosola actually 56w. An advantage of the Lensun panels is thier light weight which becomes a disadvantage in robustness. On delivery the Lensun panel had a bend in it which could not be straightened without risking further damage. For this project it is crucial that the panels lay as flat as possible to allow the magnets to do their work keeping the panels anchored even in high winds. Since the cells inside the Sinosola panels are closer together it makes for an overall smaller panel. 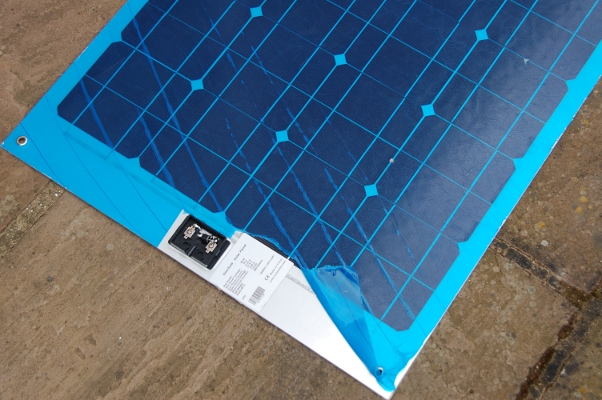 The panels come with eyes for screwing or tieing down which need to be removed as they will interfere with the magnets. All corners will be cut round to prevent scratching paint work and to remove the eyes. A small ammount will also be cut from three sides to slim them down as much as possible. After carefull marking up a jig saw with a metal cutting blade is used. 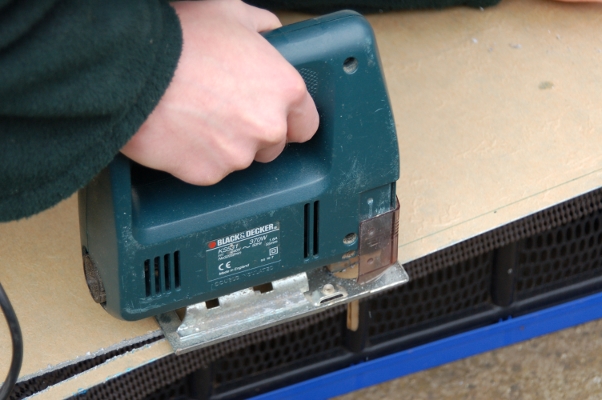 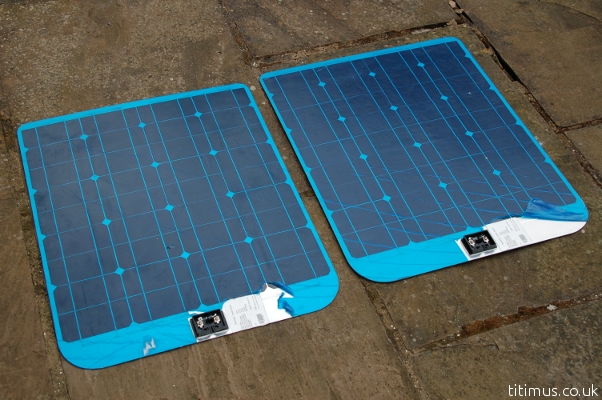 Once the panels are cut down the edges are sanded smooth. 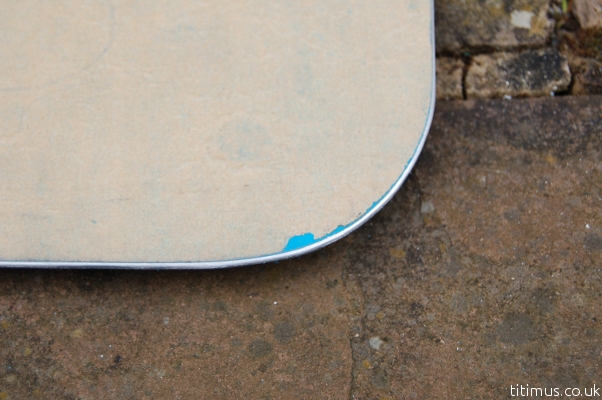 Ring terminals are soldered to 15 amp cable. In total there will be four 50w panels connected in parallel making a 200w array. During previous tests it was found in the best of conditions the panels will only put out around 2/3 of their rated power, so 15a cable should be adequate and makes connecting four wires to the junction box easier. Wiring this way seems the easiest and neatest way to go. 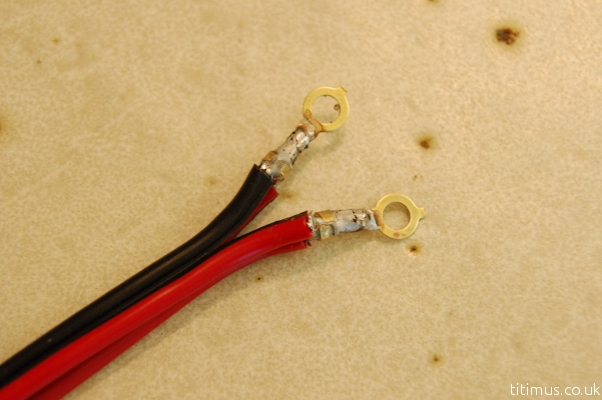 20a automotive waterproof connectors are soldered to the other end of the wires, a male and female on each panel. 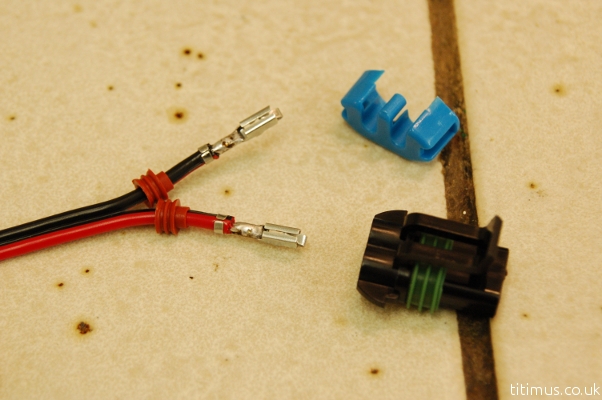 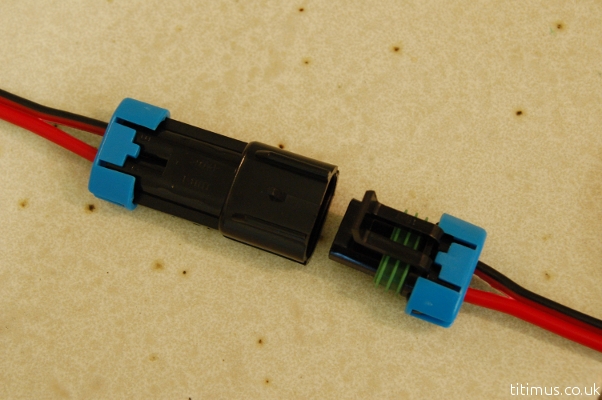 To allow the wires to fit snugly into the junction box a small ammount of plastic is removed to widen the opening. Ring terminals are then screwed in using a small ammount of thread lock. Cable ties are super glued round the wires to act as a strain relief. To ensure the junction boxes are water tight silicone adhesive is applied before snapping the covers on. Care must be taken if covers need to be removed during testing as the small plastic retaining clips are easily broken.

1.5mm self adhesive magnetic sheet is applied to the back. After some use in both freezing and "too hot to touch" conditions the magnets are still securely attached. The key to a good bond is to make sure the mating surface is absolutely clean, if contamination is suspected some form of solvent should be used to clean it (aftershave alsoworks well). Keeping things warm helps too. 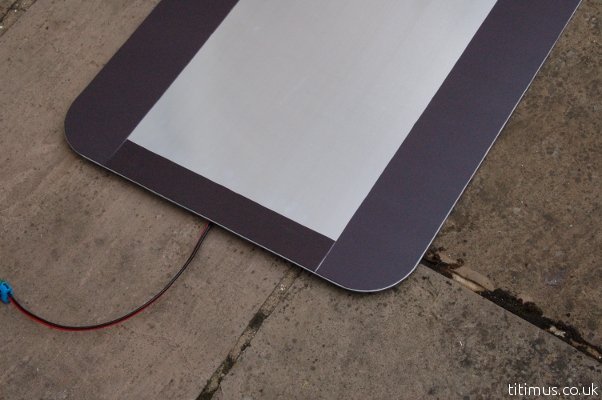 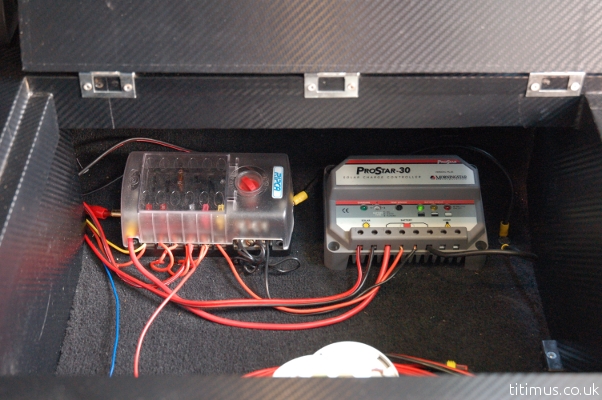 The solar array in use at Mallory Park providing the Team Titimus van with power. Theres enough juice to run the stereo on full blast and recharge the battery from last nights Battlestar Galactica session. The van also provides led lighting for the gazebo if we need it. More information on the van can be found here on the Suzuki Carry camper page. 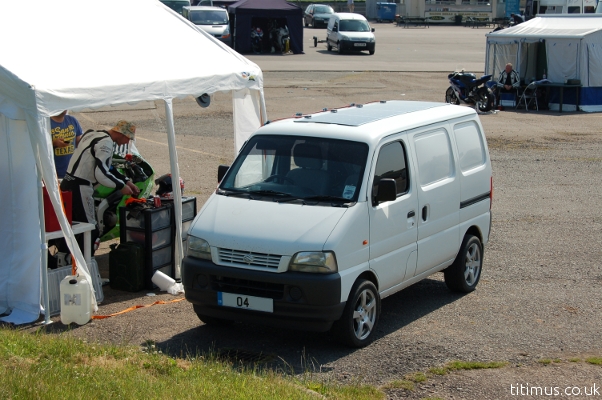 The graph shows a short log of the array using a Medusa Power Analyzer Pro. Lots of small clouds were moving quickly accross the sky creating short sunny spells. It was around 11.45am on the 11th of August so the sun was high in the sky. The effect of poor light conditions can be clearly seen in the first 30 seconds of the graph. The entire array only produces 10w in overcast conditions, this is to be expected with all solar panels. As the cloud clears the wattage shoots up to around 110 watts, not the 200 watt rating of the panels but still a good amount of energy. During testing (not whilst logging) a short peak of 126 watts was observed which is getting close to expected peak power (2/3 of manufacturer claimed rating). This proves that the 15 amp cable used was sufficient. 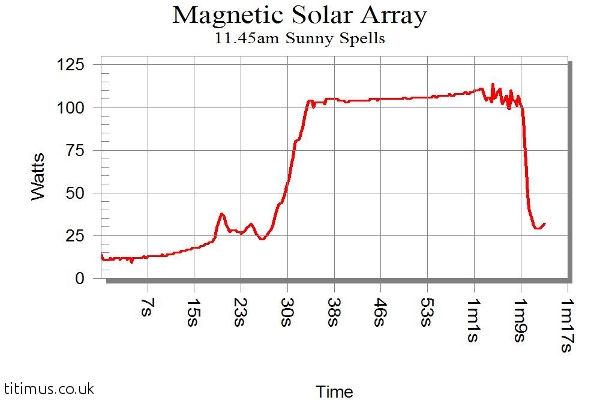 The results of this project have been very positive. During a sunny week stay away from home in the van the array supplied more than enough power to run a propex heater all night (30w) plus the tv, satellite receiver, stereo and laptop. Five or so mobile phones and cameras were kept running and two inflatable beds were also kept inflated. Overall a success, highly recommended!