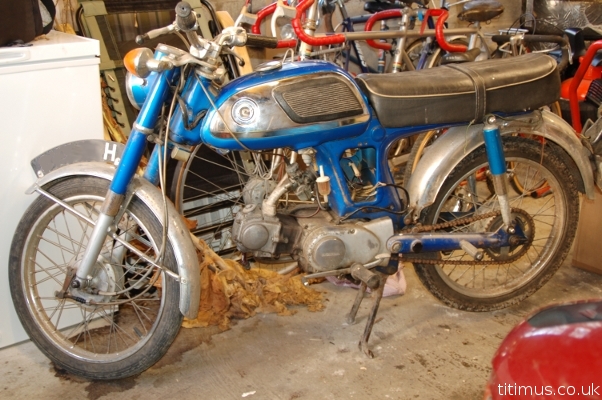 The Honda SS50E was sold in the UK from 1968 to 1972 as an economical 200mpg motorcycle. Closely related to the Honda Cub C50 it has a monocoque frame and the legendary over head cam 50cc engine. Unlike the C50 it has a manual 4 speed gearbox giving it a stunning top speed of 50mph, down hill, with a tail wind.

This particular example is pretty much complete and original. It hasnt been ridden since the 70s so only has 3200 miles on the clock. The whole bike is covered in surface rust so fist stage of the rebuild is to strip the bike and redo the paint.

Given the cost of rechroming, some of the parts will have to be sourced new. Rather than being a faithful to original restoration this will be a combination of restoration and modification. Many of the parts can be sourced on ebay, CMS also have a large stock of new old stock parts. 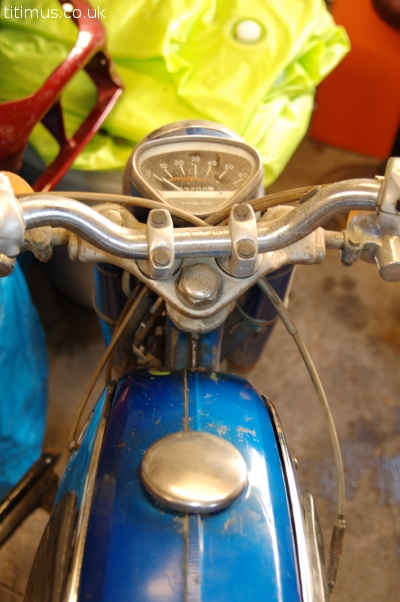 Theres not much to these bikes so within a couple of hours its stripped. The engine looks a bit tatty but still has decent compression, there's no way to test it as theres half a spark plug stuck in the hole. Rather than try to recondition the engine and convert the electrics to 12v it'll probably be cheaper and a lot easier to buy a new Chinese engine. Although the SS50 was an economical bike it wasn't a quick one, if a new engine is to be purchased then it could be bigger! 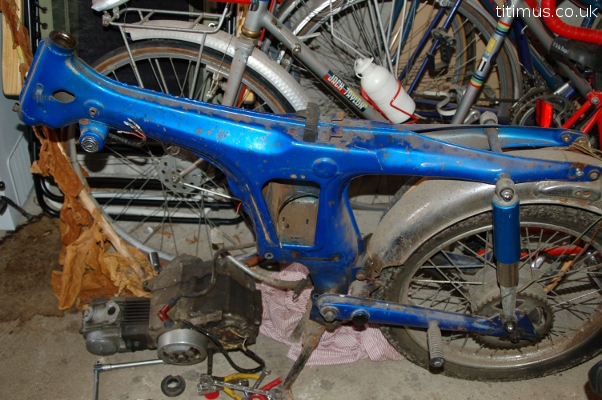 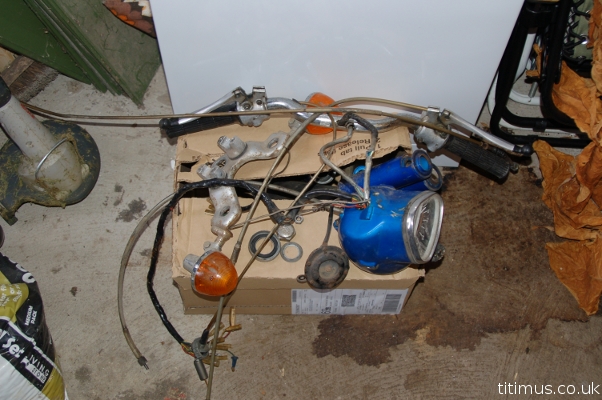 Both aluminium and steel parts are corroded on the wheels. The preferred treatmet for the hubs will be clean and polish, the rims and spokes will have to be replaced. 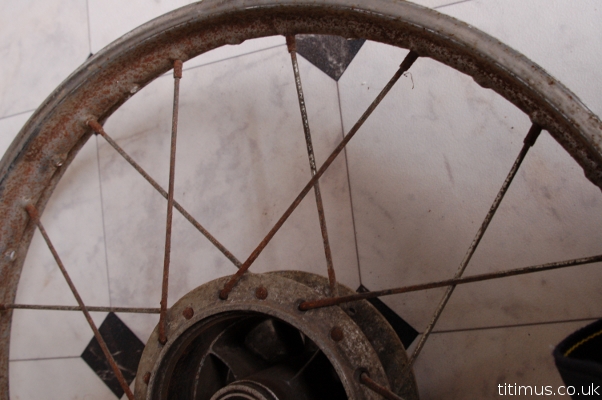 Back from the painters, the frame and tank shiny again. Classic black and chrome always look good together. After painting the head races were removed and new roller type fitted. 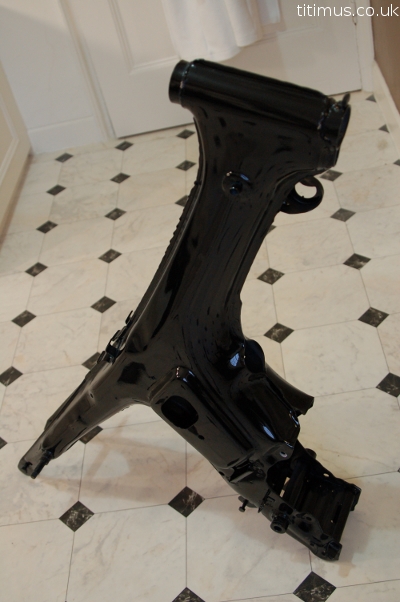 New badges for the tank were supplied by CMS. New knee rubbers and chrome side covers are unobtainable, the original rubbers have gone brittle so they'll be left in place. This will mean the metal side cover cant be rechromed, luckily the original chrome is in reasonable condition. 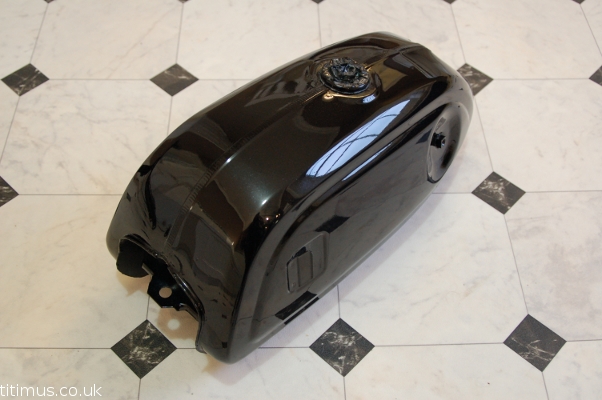 The forks have some corrosion under the paint. To save cost theyre polished by hand. Picture shows before and after a lot of elbow grease. 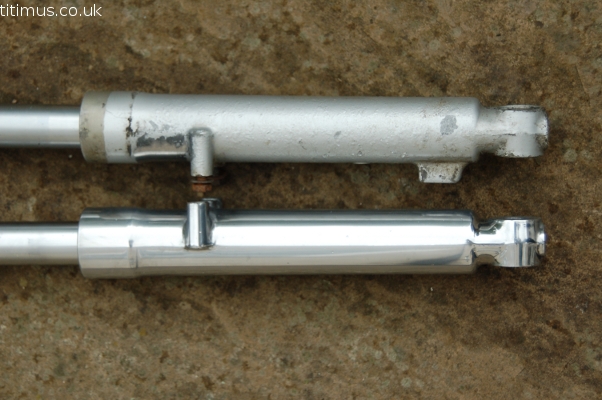 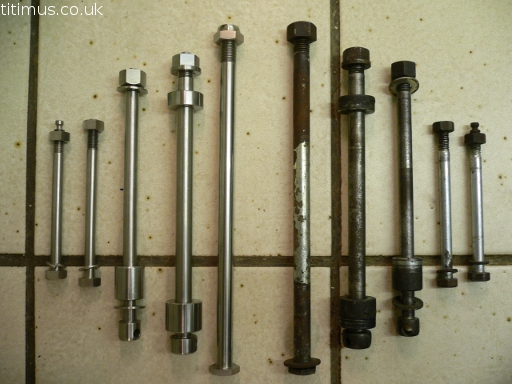 Looking like a bike again, a couple of cafe racer style parts are added. The chrome pieces on the forks were unobtainable so had to be rechromed. New mud guards are fitted, these are Chinese copies from CMS and require a bit of fettling to fit. The seat came from ebay. The standard rims have been replaced with 1.5 front and 1.85 rear Radaelis from Central Wheel Components to beef the wheels up a bit. The hubs and brake plates are polished by hand then buffed up and laced with stainless spokes by professionals. 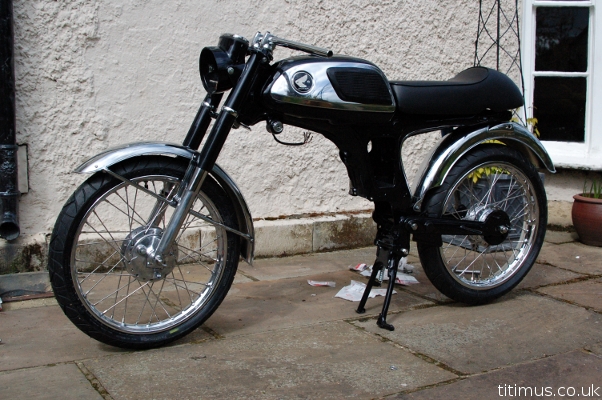 The YX140 supplied by 00Racing test fitted. Its the 4 speed 14bhp version with secondary clutch and fast road 75w generator. Engine case has been left unpainted so it can be polished more easily. Since this is a more modern copy of the original engine no modification of the engine mounts is required. To make it look a tad more Honda-ish the alloy cylinder is painted black to mimic the original iron one. Polishing the much larger clutch cover will hopefully help that to blend with the vintage look of rest of the bike. Since the clutch cover is so much bigger the foot pegs will have to be modified to fit properly. 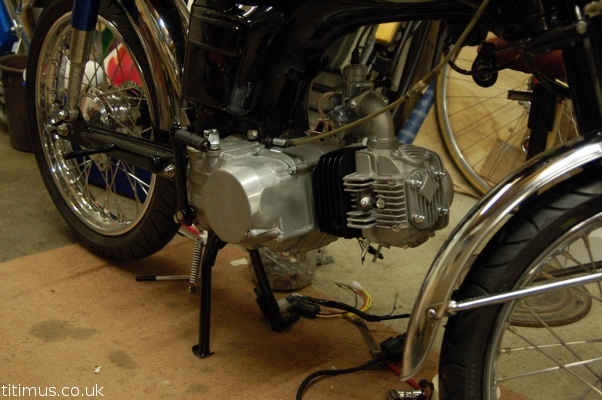 Engine case professionally polished by Allenchrome. Monkey straight through exhaust from Webike test fitted, it will have to be cut and re-welded into the correct position to avoid fouling anything. A rear mount will also have to be welded in place. 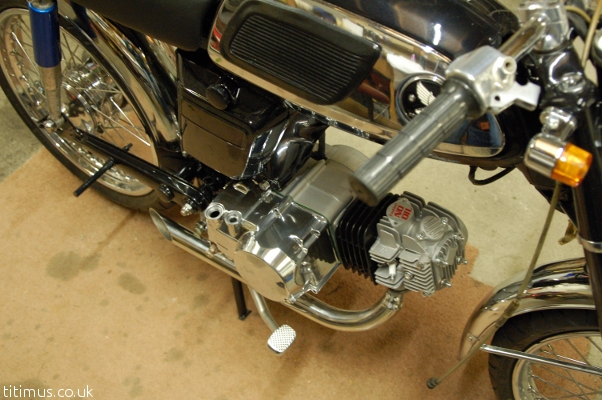 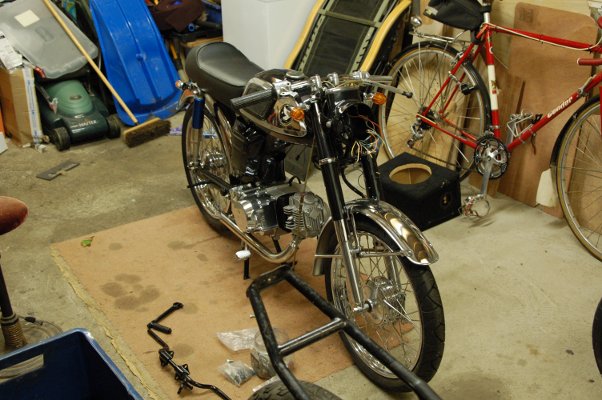 To stick with the racer theme a light weight lithium battery is purchased from the states via ebay. On testing the charging system it was found that the lithium battery was being over charged. The maximum voltage this 4 cell pack should be charged to is 14.4v, the reading taken with the engine running peaked at 14.7v so an alternative will have to be found. Something small, light, cheap and can handle the higher voltage of the YX140 generator. 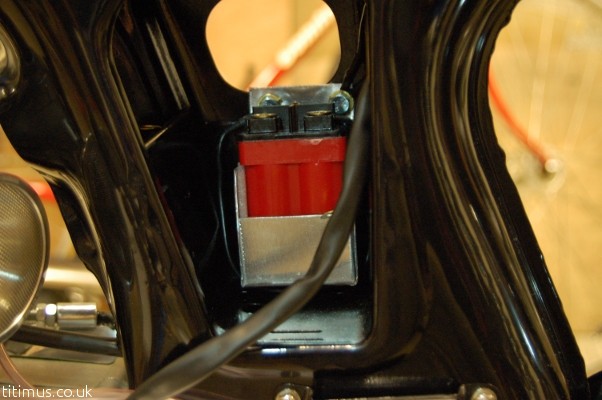 On the suggestion of a member of the Sixteener Special Sports Moped Forum a 12 volt 1.2 amp hour Yucel (Yuasa) lead acid battery replaces the lithium one. The battery doesn't need to be very big, its only there because the regulator that comes with the engine requires one.  A new battery box is bent into shape using aluminium sheet and padded with foam. 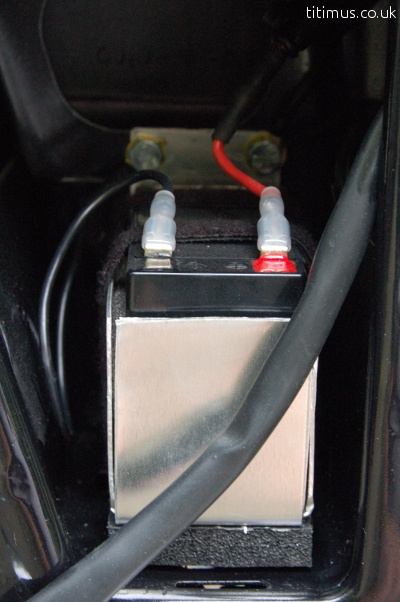 Nearly finished now. The electrics are tidied up with some new sleeving round the old loom. Headlamp and tail light are fitted - the tail lamp from Webike wasn't specifically designed for this model so needed cutting down, after which a coat of paint was put on to ensure a good colour match. 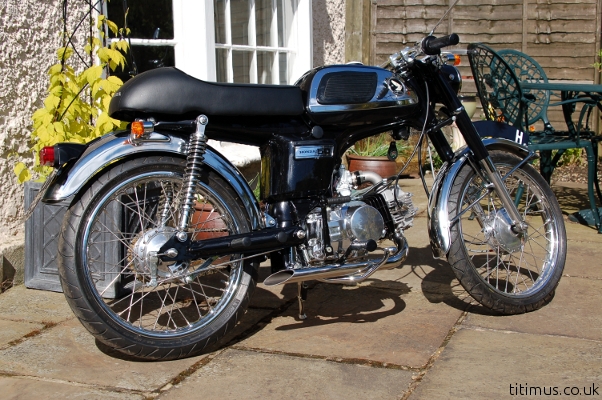 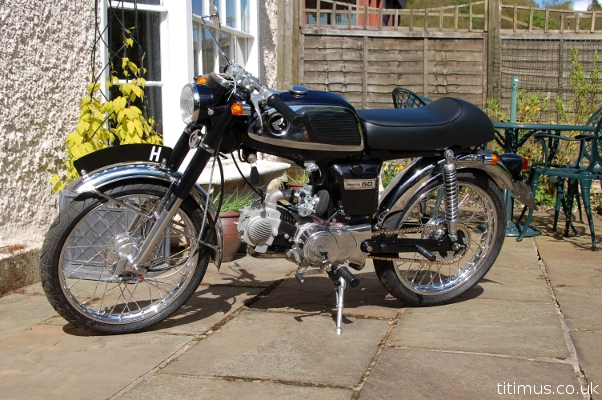 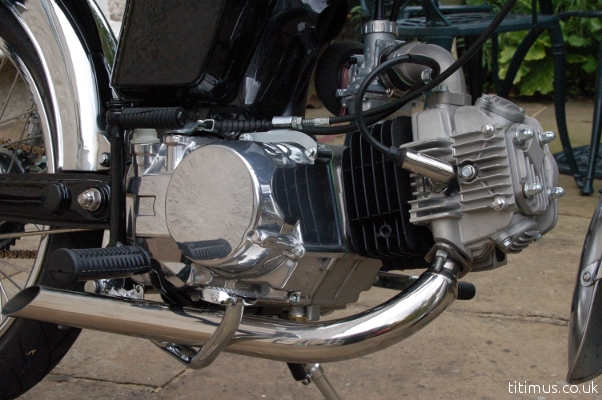 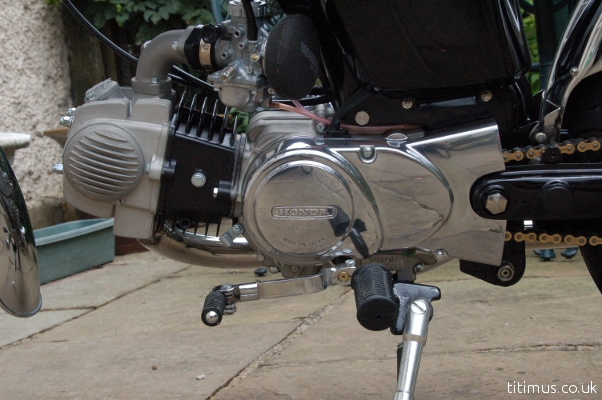 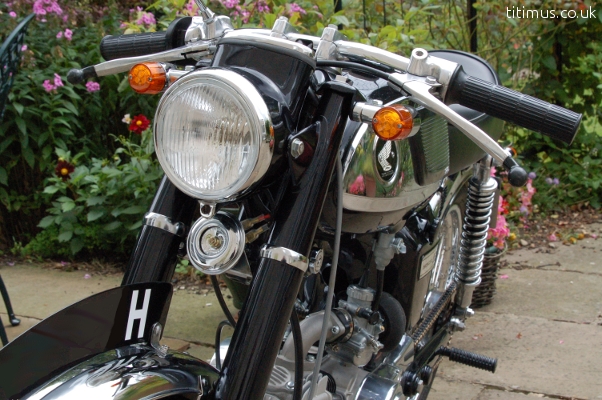 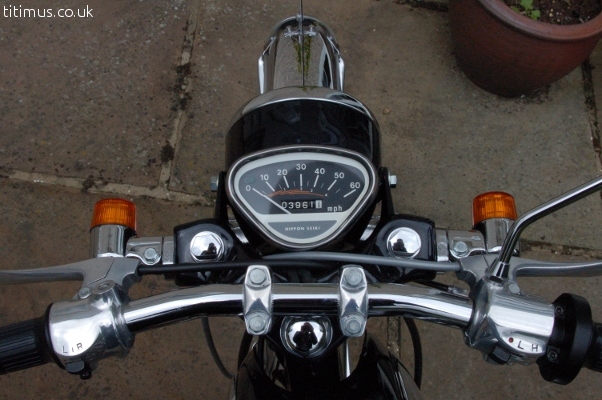 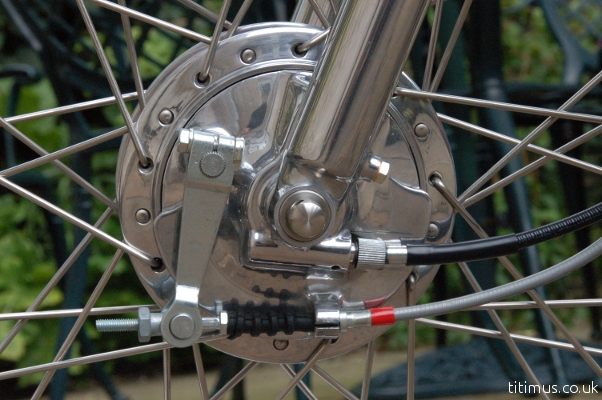 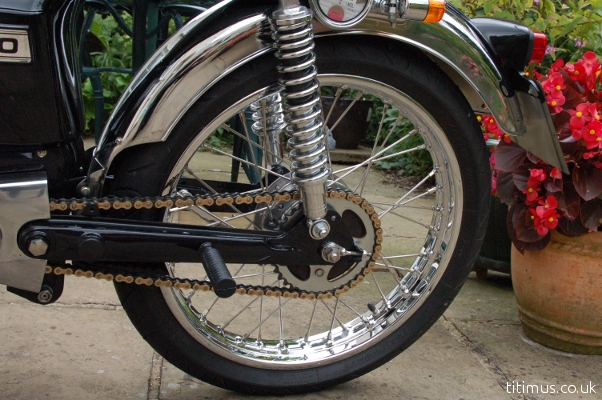 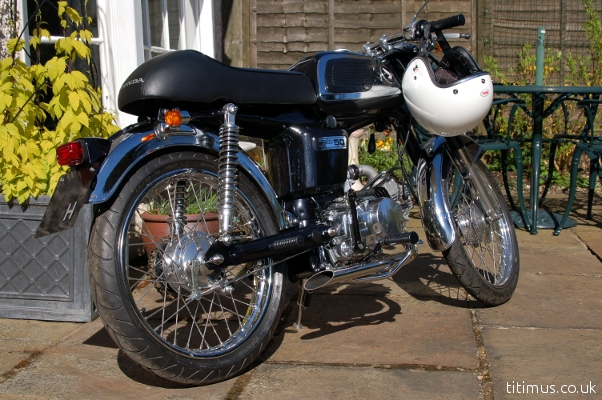 hello. I want buy fuel tank black. Can you help me? please.

I do the same job, you have done on your bike, could you tell me the brand and dimension of your tires ?

I think i will chose the same rims as you.