Jack Taylor Bicycles have a long history in building traditional bicycle frames. Most noted for their tandems and tourers Ken and Jack Taylor gained a reputation for quality hand built bicycles using traditional methods. This article is an account of the build up of a 1987 Jack Taylor Tour of Britain. 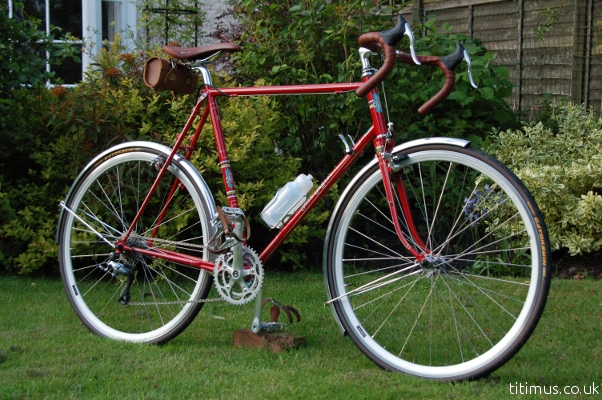 The starting point for the build is an as yet unused Reynolds 531 butted 62cm frame with hand painted box lining. Since the Taylor brothers shut up shop some years ago finding an unused frame is very uncommon. Braze on parts include downtube shifter bosses, bottle holder, cantilever brakes, rack mounts front and rear and dynamo mount. 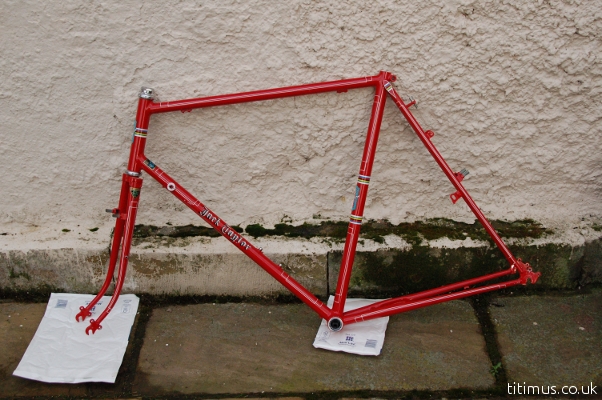 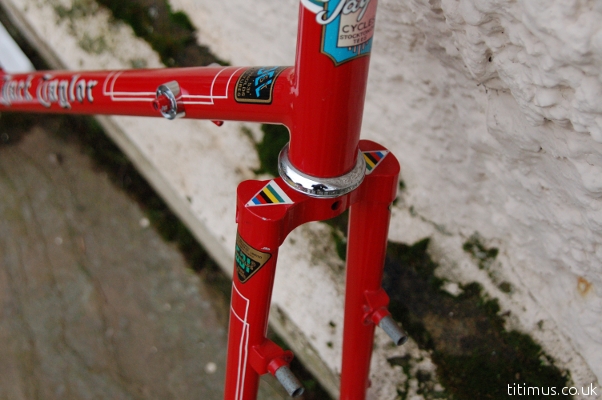 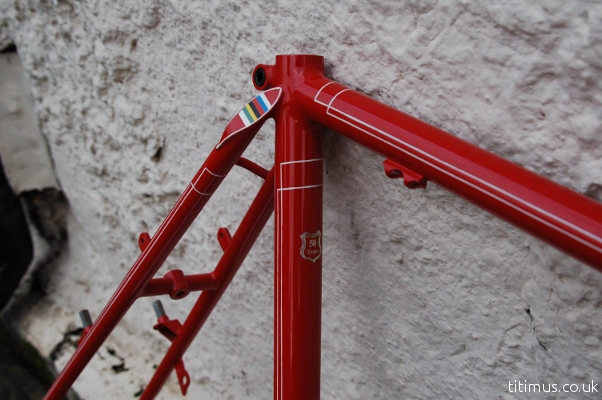 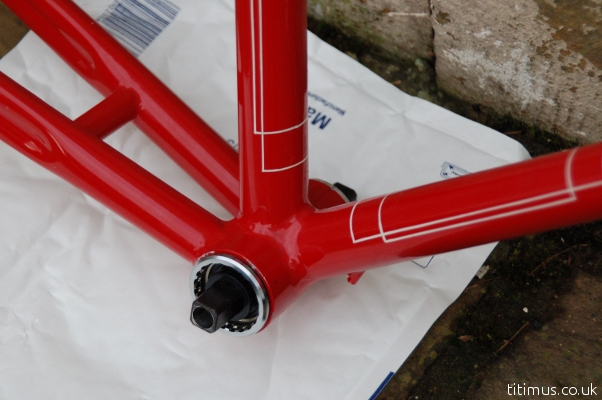 First part to be fitted was the bottom bracket bearing which uncovered a slight problem. When screwed in it was sitting slightly wonky so when the other side was screwed in tight it caused the bearing to stiffen up. The solution was to take it to Feather Cycles where Ricky ran a tapping tool through the bottom bracket to clean the paint from the threads and ensure each end was square with the other. He also checked the dropouts were square, the left hand rear needed a good tweak but the rest were pretty close. So thanks to Ricky at Feather Cycles we're back on track to start fitting parts! 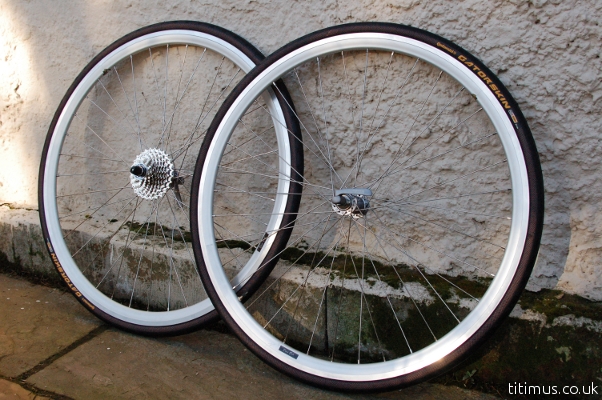 A quick call to Spa Cycles in Harrogate and (judging by the sticker on the rims) a gentleman named Dave Gall built these beatiful wheels with 105 hubs and Rigida DP18 rims. The DP18 rims were chosen as they are a similar weight to heavy duty touring rims, probably just as tough and are more aerodynamic. They could probably squeeze a 28mm tyre on but since the bike will only be used for short day trips a set of 25mm Continental Gatorskins are fitted. The 10 speed 105 cassette is an 11-28 to handle the steep hills of the Yorkshire Moors and the riders poor fitness level. 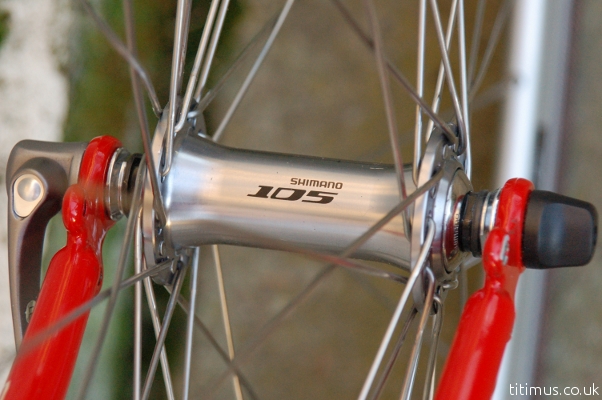 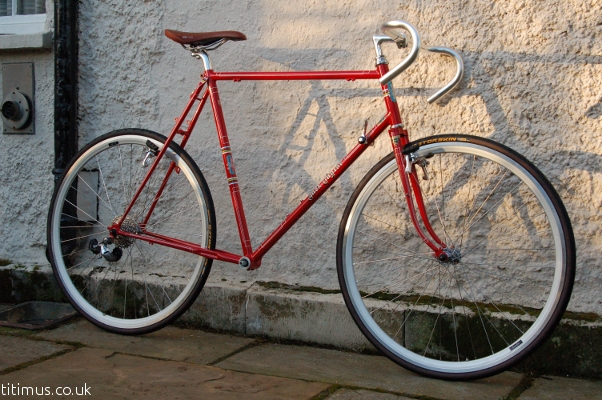 Since the frame was designed for a 126mm rear hub the rear dropouts have to be gently parted to allow the modern 10 speed hub to fit. Another side effect is that the chain won't go on the smallest gear without fouling the frame so the deraileur will be set up to use just 9 of the gears, 27 gears total should be plenty. 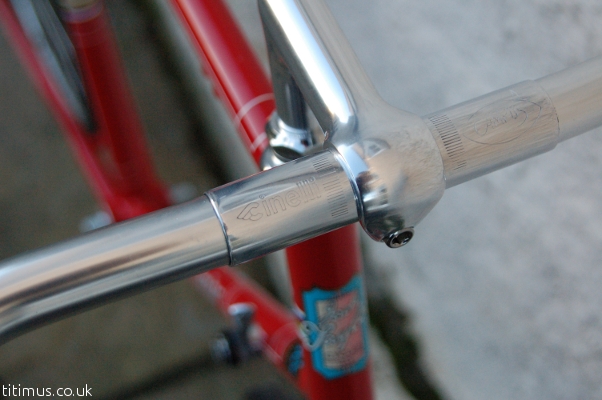 The frame had a few parts with it including these rather nice Cinelli bars, a reasonably priced unbranded stem was found on ebay. 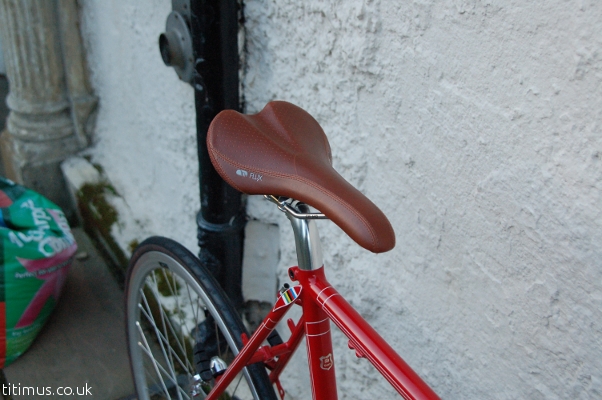 The ideal seat for this bike would probably be a leather Brooks style seat but prices for seats of that type are high. After some reading up on the internet the decision was made to use a Madison Flux seat, most reviewers said it was extremely comfortable and excellent value at £17. 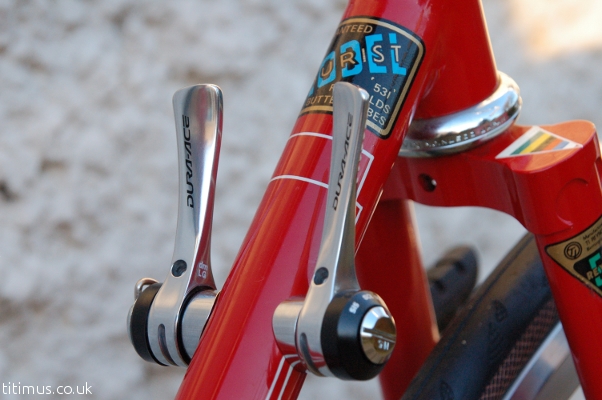 Downtube shifters are a must for any retro bike especially a tourer, their simplicity ensures reliabilty. The Dura-Ace shifters are a thing of beauty, the indexed rear lever gives a crisp, firm click as you shift gears. 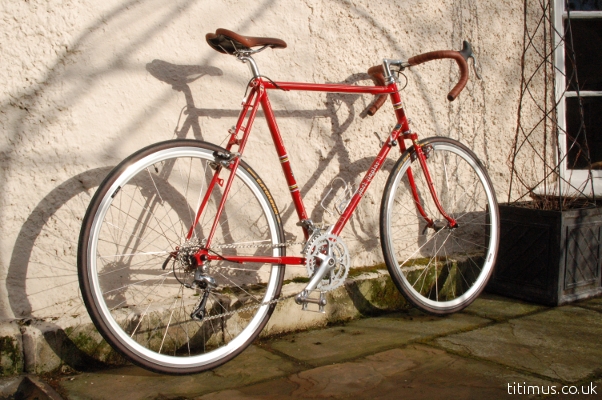 Another call is made to Spa Cycles to order the 46/34/24 Stronglight triple chainset, Ultegra R600 aero brake levers and bottle holder. Once the chainsets fitted the chain and 105 front and rear deraileurs are fitted and set up. The cheapy bottle holder was painted grey which didnt really match any other parts so was stripped of paint and the aluminium buffed up shiny. Traditional style MKS Sylvan touring pedals are fitted to finish off the drive train. 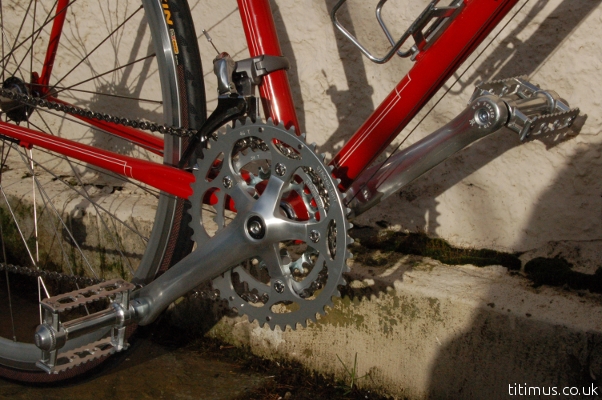 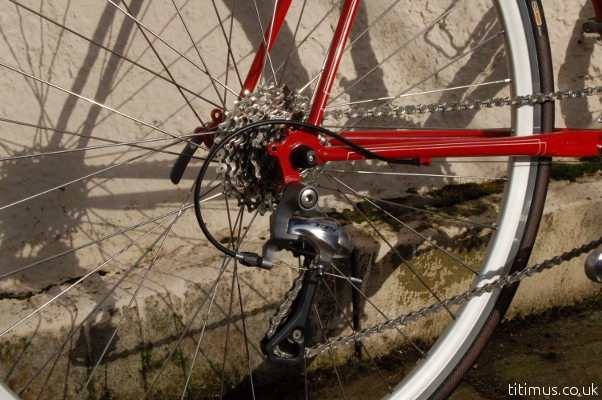 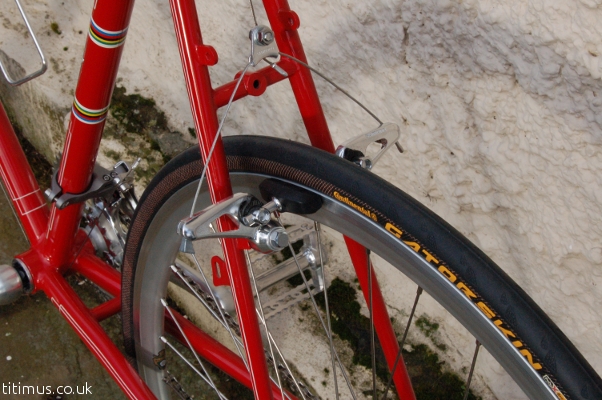 The Shimano Cantilever brakes were purchased new at the time the frame was built in 1987 and have been waiting 27 years to be fitted. The Ultegra R600 aero levers keep the bars looking tidy with the cables hidden away under some Charge bar tape in the same colour as the seat. 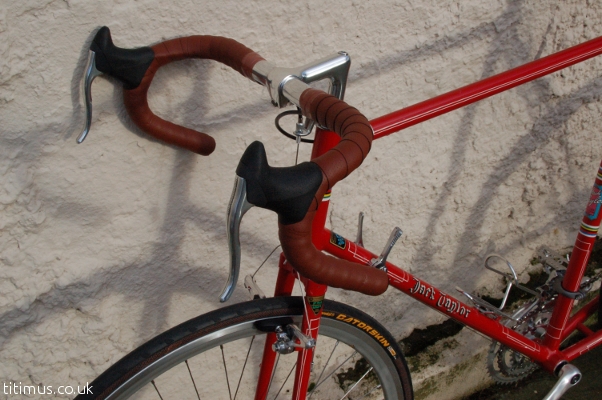 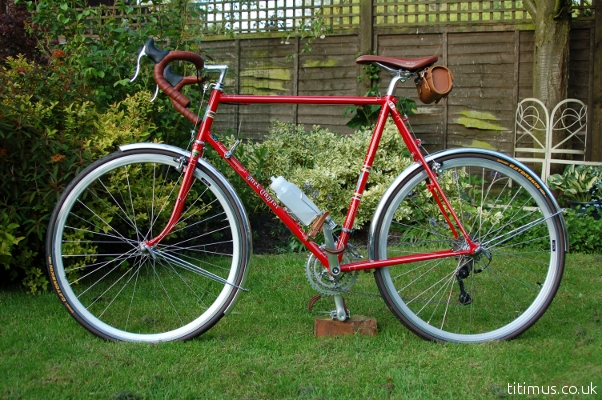 After a few test rides and a tweak here and there the bikes ready for the finishing touches. First impressions are great, a lovely smooth ride with crisp accurate gear changes. The brakes leave a bit to be desired but should bed in given a bit more use. Spa Cycles come up trumps again with these classic leather covered toe clips and straps, unfortunately the clips were only available in dark brown so dont quite match. In hindsight it would probably have all matched better if the straps were the same colour as the toe clip leather, never mind. 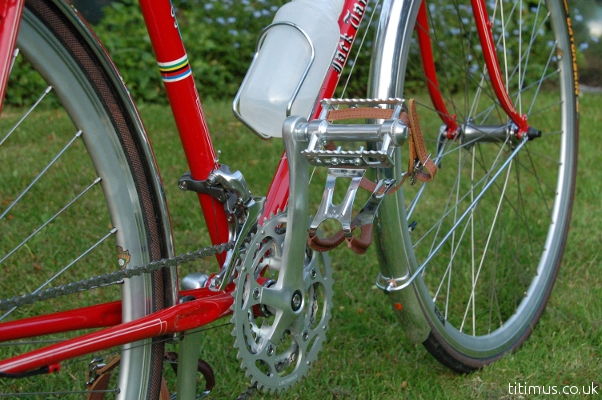 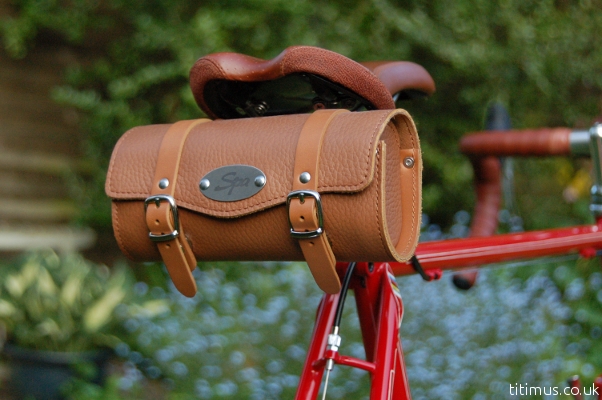 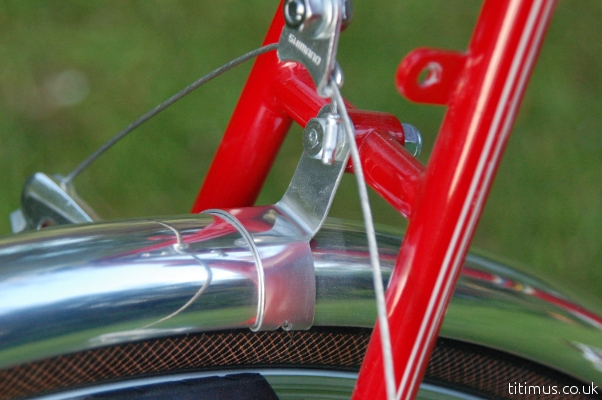 Any touring bicycle wouldn't be complete without a set of mudguards. Fitting these Velo Orange VO 37mm polished aluminium mudguards or fenders as they call them in the US was probably the trickiest part of the build. Since there was a large gap between the mounting holes and the wheels some extra long mounts had to be made. The original mounts were copied onto aluminium sheet then lengthened and cut out. The rear mudgurd front mount was made using a p-clip then spaced out using some of the leather washers supplied in the kit. 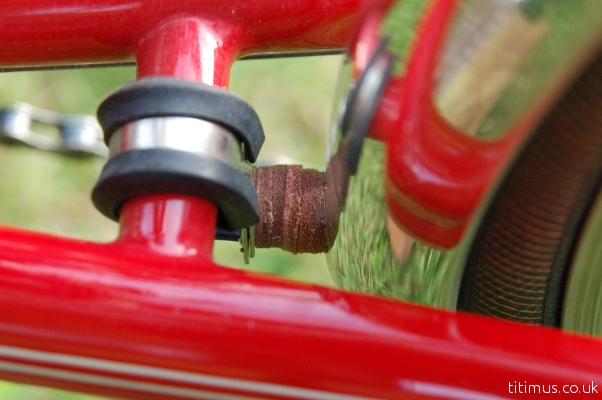 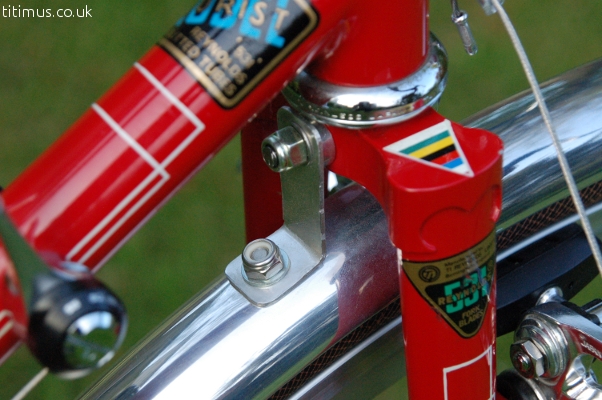 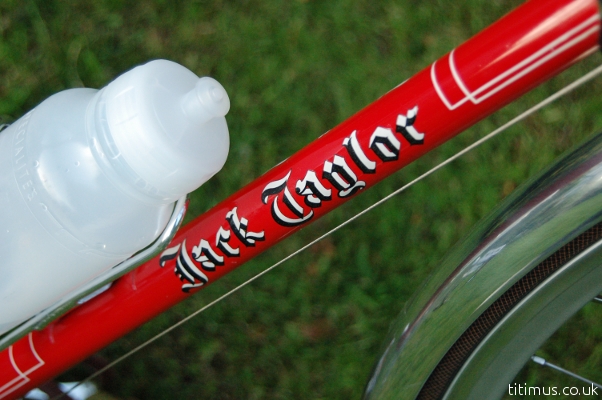 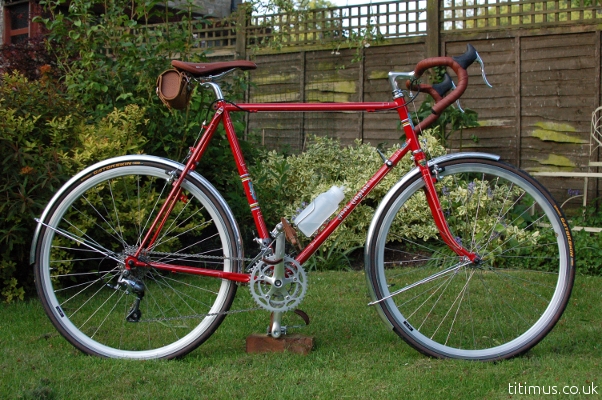